Artist Kirra Jamison has landed in Bris-vegas for her solo exhibition Locomotor at the landmark Jan Murphy Gallery. Situated on busy Brunswick Street, the gallery offers Jamison an opportunity to market her paintings and prints to a suitable demographic. Exploding with a kaleidoscope of solid contemporary colour her work is abstract and emotionally charged.

After graduating from the Queensland College of Art, Griffith University, with First Class Honors, Jamison in 2007 received a Samstag Postgraduate Scholarship to study in Los Angeles. Jamison has gone from strength to strength particularly with the designer set often featured on cult-like website, The Design Files and has branched out into the manufacturing field teaming up with Microsoft to produce a mobile wireless mouse artist series!

Compared to past exhibitions Locomotor has ventured further into the abstract depicting very little of the familiar. Less intricate and detailed then past collections Jamison employs simple intuitive combinations of colour, line and form. The works resemble those of Matisse, clean simple layouts and sophistication of form. Comparing Jamison to Matisse is a grand statement however it is rare to see a contemporary artist with the high level understanding for colour, line and form as the 20th Century master. The work below is a collage of complimentary colours applied with gouache on white paper, part of Matisse’s last major body of work. 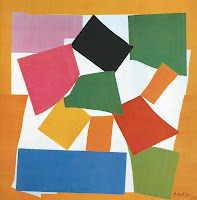 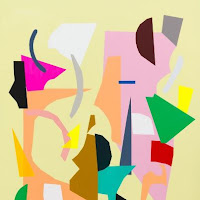 Jamison’s paintings at first glance give the impression of prints and therefore my natural instinct is to expect a high level of execution with paint application, the same perfection I would demand from a printmaker. At closer inspection the overlapping of colour and shape may seem to be applied clumsily and the sophistication traditionalist demand missing. The small somewhat 'accidental' mark on the crisp canvas appears to be misplaced but the viewer is unsure. Traditionally for a painter laying the medium with absolute dexterity is crucial but in Jamison's work this 'lack of perfection' gives the artist freedom to disengage with traditional practices. Jamison brings a truth, an unpretentious approach to her work possibly a deliberate move from the digital revolution so ingrained in the contemporary art world.

Edward Colless of online magazine Art Collector sees Jamison's hard-edged outlines as responses to Mexican paper-cut designs as seen in day of the dead flags and Indonesian shadow puppetry. He goes on to say how Japanese imagery and materials have also played a major role in her work pens and brushes collected on a 2010 trip give her work those crisp detailed edges. Tokyo has been a major influence on Jamison. After her exhibition in 2009 critic Matsui Midori who coined the term Micropop, an art primarily emerging in the Japanese art scene and in opposition to what has dominated for well over a decade, giant cartoon-like works, confirmed Jamison's sense of understanding into the new genre as sustainable in her art practice.

Styled, colourful and contemporary, simplicity is a stand out in these works. One can only imagine the breadth of deconstruction required to reach this notion of effortlessness, clarity, crispness and intelligibility. Continually moving forward and extending her body of workLocomotor has proven Jamison’s art practice has depth and therefore longevity in an environment that can be, to say the very least, fickle.

As outlined in the gallery profile Jan Murphy is committed to the exhibition and sale of contemporary artists and in Locomotor this mission rings true. At $8000 a pop or there about one cannot ignore the ‘white elephant’ in the room in that the artist, gallery and collector all need to make money!

(permission to use these images has been granted by the artist)
Email ThisBlogThis!Share to TwitterShare to FacebookShare to Pinterest
Newer Post Home