The name of an exhibition poses a question and it is with interest that the “?” is a literal question. Propaganda by definition is a form of communication (possibly biased) that is aimed at influencing the attitude of a community toward some cause or position.
Propaganda is repeated, promulgated and spread over a wide variety of media (and in this exhibition many media is sourced– mosaic, painting, collage, print, photography, sculpture) in order to send a message to a target audience. Propaganda (by definition) uses loaded messages to produce an emotional rather than rational response to the information presented in a bid to change or influence an attitude toward the subject or idea in a target audience. Propaganda is sometimes referred to as a form of political and information warfare.

Where GOMA aims to target exhibitions for a wider audience the University of Queensland comes from a more academic slant. As Director of the University of Queensland Art Museum, Campbell Grey points out, “psychologically, a university gallery means, I am here to learn, to think about society and its’ progression and therefore we engage with audiences in all kinds of ways – working with artists, scholars and historians”.

At first glance the exhibition Propaganda appears to be overtly political in comparison to Return to Sender. Reuben Keehan, Curator of Contempory Asian Art, has a keen interest in ‘propaganda,’ originating from his childhood in the early 1980’s where he viewed, of all things a screening of some 1950’s and 60’s cartoons! He concludes, in an interview with Paul Andrew of the online blog Interview, that these cartoons were odes to capitalism and as his father pointed out at the time, definitely not educational. It is important to note his keen personal interest of ‘propaganda’, as this along with his present position at GOMA, has been part of the driving force in developing this current exhibition. 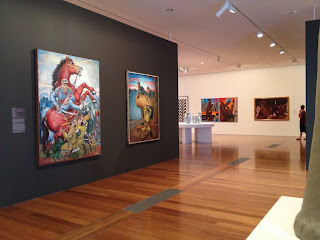 This particular work, is very much in line with a cartoon-like style of painting and may very well have been the reason why Keehan was drawn to it and ultimately included works of this style throughout the exhibition. As Curator of Contempory Asian Art this very personal experience along with the extensive Asian works collected by the gallery over the last twenty years has emerged this fascinating exhibition.

I interpret Propaganda as an exhibition that attempts to ignite a curiosity about the current and historical position of Australia in a modern-geo-political context. Currently and into the future, Australia is being positioned geographically and politically as part of the Asian Pacific region. Where does Australia fit with Asia? In history, now, and in the future?

At first glance Return to Sender appears to be dis-jointed. Moving throughout the gallery space, confusion, of not knowing, of wanting to know more about why these works have been brought together. Covering a broad cross section of ideas, from, femme fatales, family photographs to ethnographic photographs of Aborigines. 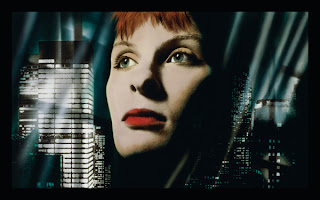 This unease of Return to Sender can very easily place the viewer in discontent where one can quickly discard the exhibition as a frivolous experiment on gathering a bunch of artist who all left Queensland into some odd type of reunion. It could appear to be a rather decadent exhibition in that respect.

The initial dis-connection between the artists’ works in Return to Sender creates a tension in which curator Michelle Hemrich may just have been aiming for. Rex Butler notes in the exhibition catalogue that each of these works does touch on displacement. Most obviously is the work by Fiona MacDonald reflecting the displacement of Aboriginal, Chinese and Pacific Islanders in Australian society, bringing to the forefront Rockhampton’s hidden history.

The political and social fabric in Queensland, at the time, was a time of displacement and amplified in the then ground breaking show curated by Paul Taylor in 1982. His exhibition, Popism, started a dialogue examining the current political and social climate at time, particularly for Australian artists. Literally with the extreme of the Sir Joe Bieke Peterson government, extremely conservative and oppressive, these artists felt it necessary to leave.

Rosemary Laing explains. “I needed to get rid of the paddock fences and make what I imagined. There had to be somewhere else”. Whether it was in the same way peoples were displaced in Germany, North Korea, China, Japan and of course the Aboriginal people, there was still an experience, a disheartening belief, amongst some, of being displaced.

Both exhibits stamp a point in time where different societies, politically motivated, were attempting to gain power.
The significant issues raised in Propaganda, it was a time of the Cold War, East versus West, the Asian nations racing to the top, while the US and Germany maintaining there own industrial powers. Propaganda is more concerned with military power, Return to Sender and its curatorial premise was dialoguing a more conservative story about power.

Success in an exhibition is about starting a conversation, a dialogue and in this case Hemrich has started a dialogue of where Australian art has come from. It is important to note also that Hemrich is already underway to bring together an exhibition based on the artists who remained in Queensland at that time. Obviously there is more of this story to tell. This story brings to the forefront the historical context of Australian artist suppressed by the political and social fabric of a conservation government lead by Sir Joe Bieke Petersen.
Email ThisBlogThis!Share to TwitterShare to FacebookShare to Pinterest
Newer Post Older Post Home