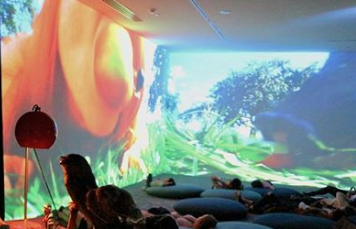 If standing in line to enter Pipilloti Rist's keynote lecture was an indication of how the exhibition Sip My Ocean was going to unfold it was bound to be a blockbuster. I had been looking forward to this exhibition I had fronted up to at the MCA in March, some eight months early.

Rist, a Swiss artist born in 1962, was originally named Elizabeth, however changed to Pipilotti inspired by, yes Pipillotti Longstocking. Living and working in Zurich Rist lives and breathes her practice. She enters the room with her trademark glasses and is elegantly poised and dressed simply and beautifully in pink with her hair tied back. The audience, predominantly women, is in ore, one would say starstruck.

Rist opens the floor while addressing two images of the twenty-five technicians and artists who helped install, names and acknowledges each person individually. She acknowledges their skills and is ever so mindfully grateful. Rist in earlier times was an applied artist who worked in lighting and staging and therefore has a good understanding of production and collaborating with crews of people. Rist learnt that the smaller the crew the more opportunity for trial and error. For Rist, a smaller crew leads to a work more closely aligned to process rather than production.

Rist talks us through how she organises her practice, her exhibitions, her work, while humorously pointing out a slide of her studio, a mangled mass of electrical cords and wires and admits, "I try to treat the cables like organised structures” but explains, she is actually more like a carpenter who avoids completing his work and hence her cables are a mangled meyhem. The room can not help but laugh. While Rist describes her practice, she is excited, she is passionate to the extent she apologises, "I’m sorry, I need to calm down”.

Listening, you know her practice comes from an inner world, somewhere deep where thought and imagination dominate. She explains, “I am more interested in the inner picture, so I never try to compete with high resolution images”.  Rist describes how with camera in hand she keeps it fluid while simultaneously walking through streets, through gardens. Sometimes she uses small cranes but always aims to retain that free flowing organic style even though it is technologically jam packed. While preparing for her exhibition Pixel Forest at the New Museum in New York, Rist was provided with a team of technicians for install but she claimed "they were rather unsuccessful". She explains, the only way for her work to succeed is by continuing to fumble through the process, the way she has always done, for some thirty years.

Rist proudly admits her admiration for Beyonce as she explains the similarity between their works, Beyonce's Hold Up, 2016, and Rist's Ever Is Over All, 1997. Rist is in fact chuffed and points out she is a massive fan of the singer even though as she says liking Beyonce is not considered so cool.

Rist is genuine, has a deep appreciation for life and for the planet and so easily observed in her work but also in her personal philosophy  as she encourages us to, ‘never forget we are an animal…and that often we think the grass is greener in the other garden”. Rist applies her own interpretations on the world, on phrases and ideas and morphs them to create meaning.